The weather has given us another lay day so I’m taking the chance to look at updating the blog a little, I’m quite far behind.

We took the day and Bonnie and I went ashore and spent several hours walking around Khalkas. We wanted the first part of the day to be the walk up to the fort. It was closer to noon than we wanted but we were a little late getting going. We figured we would walk up to the fort spend a little while there and then walk down for a snack near the water and get cooled off by the water. We walked up hill gradually weaving up the hill, at one point we stopped a gentleman and asked if he spoke english he nodded “A little”, when we started to ask about the fort he put up his hand to stop us, “Castle” he pointed up the hill then made a motion to the left and then put his hands together like a small path “Castle” he said and kept walking. Why else would two VERY OBVIOUS tourists be this far up the hill. 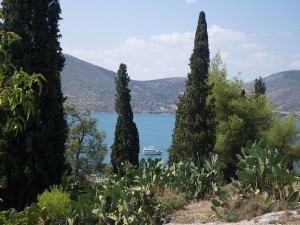 Odelia peaking out between the Cyprus trees and the cactus

It was already hot, the nice walkway up to the fort was lined with cactus, Cyprus trees, and others, very pretty, very good at cutting the wind to nothing, and there wasn’t much to start with. 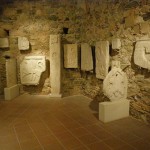 Some of the carvings were amazing Click for a larger thumbnail

The fort was one of the most well done exhibitions we had ever seen. The fort was almost empty with only a half dozen other people in the place. We ended up spending a couple hours there looking at the exhibits and taking lots of pictures (over 200). The fort spent a lot of time on the history of the architecture. Columns and ornamentation from the different periods of Chalkas’ history dating back to 500 BC.

We were impressed with the exhibits and if you get a chance to get to Khalkas it is well with the history lessons on Ionic, and Corinthian columns and architecture and why the columns were developed. One of the nice things was that the plaques that talked about the items were made after the items were placed. So the plaques included pictures of the wall beside you with the items numbered and those numbered items were referred to in the information of the plaque. Everything was easy to identify and everything had a reason to be there. All in all, very well done. 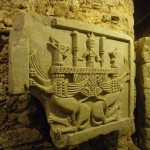 Beautiful detail in the work, one of the more than 200 photos taken in the museum

From the museum, we walked down the hill to the Jam Cafe where we Rick and I had a beer the day before. I was thinking about a beer but decided on one of Bonnie’s frappe. I had a taste of her’s when we were in Corfu and it was great. I don’t know what was going on but the top foamy area of the drink tasted the same and was great, the bottom half was not good at all, if you stirred it up a lot then it gradually tasted better but we both thought that they were disappointing. They did bring us a cute little bite, a Belgium Waffle chopped into individual cups and the cups were filled with a chocolate mousse and sprinkled with icing sugar. Very tasty. 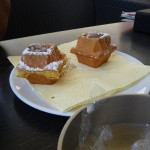 We left the Jam and started walking around the other side of Khalkas, bonnie didn’t quite believe our “unlikely alley” story so I walked her over to the building where we found the port police. We were on the opposite side of the street from where Rick and I were walking and it is true that if we kept walking there was a more obvious entrance. But this is where we went to find the Port Police to for dealing with the bridge. 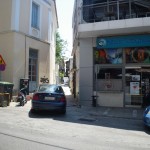 We walked past the alley and toward some of the old buildings that we saw from the boat. We have been hearing the bugle calls for the military base, early in the morning and at sunset. Rick recognized the same ones from his time in the military.

There are lots of old buildings being repaired and some of them don’t look like they have had much work done for a while. Words that seem very abstract to us are very real here, the Byzantine era, the Ottoman empire, the Roman Empire, instead of abstract concepts of time vaguely familiar, they are very real and exist as buildings and objects that you can lay your hands on. 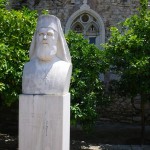 Another thing that we love to see are the flowering trees and vines that snake up the sides of buildings and produced massive explosions of color three and four stories up. We sat down and rested in a little park that had a grape arbor so thick that the occasional spot of light that made it through looked garishly white. Olive trees, rosemary bushes, grape vines, lime trees, and fig trees appear from random places as we walk.

We walked back along the second street from the waterfront and found lots of little shops, supermarkets, and hair salons, the cafe’s rule the waterfront. We walked along and the little date, time, and temperature sign was reading a few minutes before rick was supposed to leave the boat and only 32 degrees. We didn’t see the dinghy so we walked up to the bridge so we could look and see if the dinghy was still attached to the big boat, it was, so we sat where we could watch and watched the world go by. Bonnie watched the current under the bridge with the whirlpools as well as the colorful people. Fashions are bright here. Just as Rick and Utz were coming to the bridge they were headed off by a 35-40 foot powerboat dragging a huge wake. They followed behind and they got caught in the reflection waves from the side of the bridge and Utz looked a little nervous. They were squirted through very quickly.

Utz had his pack with him. He was heading off to Athens to play tourist for a day before heading back to work. Bonnie and I were left guarding his stuff, Bonnie wasn’t allowed to go with him to the grocery store “She says no too often” and Rick was off to the port police. By the time Rick and I were on our third beer it was time to head back and for Utz to head off to the train station. We waved to him as we passed under the bridge and back to the boat for the close of Shabbot. 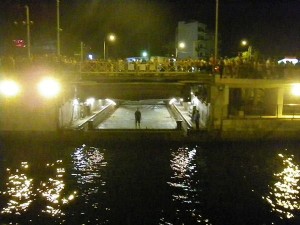 The retracted bridge is above the guy’s head

The instructions were for us to listen to the radio on Ch 12 starting at 9:30 for they would call 20 minutes prior to the opening. We went up on a short scope turned on the radio and waited. At 11:30 they called. Southbound boats would go first. The first through was Carpe Diem a good sized sailboat (43) the next through was a freighter. Then a few smaller boats. The first after that was a large motor yacht from the Northbound crowd of which we were one. We had heard him call the port police about his agent arranging for him to go through. After that the call came for all the rest of the boats to proceed at safe distances, that instantly turned into a dogs breakfast of 7-8 boats, one of which was us, trying to go for the small space on the seawall in front of the cafes. We were wedged into a bunch that had several sailboats and a power boat in front of us and a pack behind us. We really couldn’t get out of the pack or pass the pack all we could do was sort of fit in. As we passed the bridge we started to notice the crowds on both sides of the bridge, all taking pictures and having a party watching the boats. We were eye level with most of them. We took a few pictures of the retracted bridge, strange system

We didn’t have any chance at the seawall, and the music from the cafes was so loud I’m not sure we would have wanted to tie up beside it anyway. We did a little loop out of the channel and anchored beside a small lighthouse and went to bed for the night. 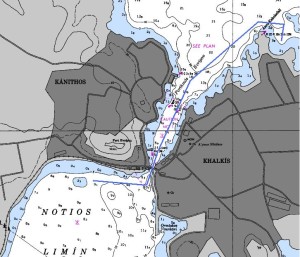 Our midnight run through the bridge