Our Anchorage looked better in the morning 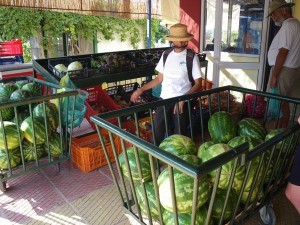 We were all tired and a short day was called for. We did about 25-30 miles up to Atalantis on the east side of mainland Greece. As we were up and underway by 6 am the anchor was down before noon. We all had a nap at one time or another during the hot part of the day. We swung by a sailing catamaran called Swanie. Swanie was another boat with an American flag. There are a lot of American flagged vessels here and a lot of them are from Delaware. Europeans can use Delaware registered companies as a tax dodge to avoid paying taxes on their boats. As a result there are a lot of American boats that don’t have any Americans on board. Swanie had a tattered American flag which is usually a sign of a Delaware boat, but this one was labeled as San Diego so we went over to say hi. Mike and Swanie are from California and are cruising here. They were having problems with their outboard and were looking for a place to have it fixed. I have the feeling boat maintenance was a check writing procedure for them. They gave us info on where to land the dinghy and we went ashore looking for Internet service, a bakery, and a market, the three staples of any successful stop. 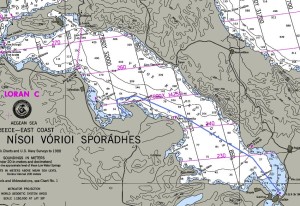 We were successful in all three, we checked the weather and the next day looked good for a trip up the Northern Gulf of Kolpos between Evia and mainland Greece. It was here that we actually figured out that our route was actually becoming a circumnavigation of mainland Greece from Albania on the west side to Turkey on the east. We are looking at heading up to the finger’s off the mainland to get out of the Meltimis completing our circumnavigation. We were amazed to see the amount of agriculture that is going on in Greece, as we turned the corner on Atalantis there were lots of houses that were stopped in mid construction, evidence of the economic problems existing here.

Tomorrow would be another longer day, not real long but the guide book tells us that our next port is a Sunsail base with space for yachts on non-turnover days. There should be several taverns, fuel by mini tanker. We only have about 400 gallons on board so Rick is looking for a mini-tanker to get the bulk rate on fuel. That’s enough for about 40 hours of travel but he doesn’t like to run it that low. We are thinking about a day off so that’s a good place for it. 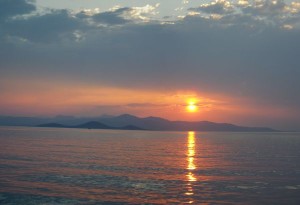