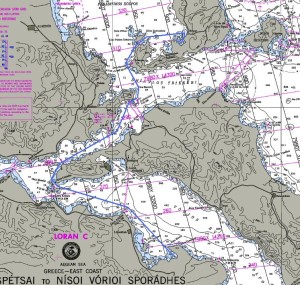 Our track for July 15

We were up for another “Crack of dark” trip. We like to be up early and underway before the wind kicks up so just before dawn is not unusual. If we leave early we get in early.

Another reason to do was that we were looking for a day off, we could get there early, tie up at the dock, arrange for a mini-tanker to refuel, out to a taverna for supper and to bed for a nice night tied to a dock. 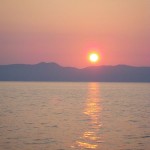 We watched the sun rise over Evia and it looked like another beautiful day. As we got to the point on the northwest corner of Evia we cut in close to save three corners of a rectangle to go around a small group of islands just offshore of Evia. We were no more than a couple hundred feet off and we were still in over 100 feet of water. On one hand it’s great to have so much water, but it does limit your anchorages.

As we traveled we passed what looked like a walled monastery, high up on a hill overlooking the valley. 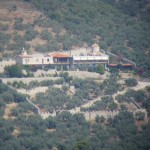 Some things don’t quite work as planned. The guide book is usually pretty good, but this time it struck out. We came slowly by the rickety looking dock that serves as the Sunsail base. If we tied to it I would be worried that we would rip it to pieces if the wind kicked up and we were tied to it. The one taverna was open but the Sunsail base wasn’t really a place where we could tie up for getting fuel by mini-tanker. The anchorage didn’t turn out to be the best either, so we looked at the weather and decided to try for Skiathos the next day as our layover day.

We like it when the three weather places that we check actually agree on what the weather is going to be. So far Meteo.gr has done a much better job for getting the land effects right, Passageweather.com seems to do a better job at getting the open seas right. Poseidon seems to match Passageweather MOST of the time. Meteo.gr had the winds at force 3-4 early and by 9am force 5 at the cut between the mainland and Skiathos. Passageweather was showing no winds period (force 2 hardly counts as wind). We decided that if we got up and it was dead we would go with the Passage weather forecast and go at least as far as Skiathos if the cut was really dead we could turn up and run for the fingers (the peninsulas at the top of the Aegean). If we got up and it was the Meteo forecast then we would try for Skiathos and if the cut was too rough we could bail and turn back to one of a couple anchorages we would pass just five or so miles from the cut.