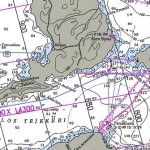 When we got up there was no wind. We pulled anchor and were seriously considering a run for the fingers. We got little to no wind until we passed our first bail out anchorage marked by a conspicuous marble quarry near the entrance. The quarry was fascinating, the cuttings and waste from the stone had just been tossed over the side and over the centuries the waste rock covered the whole side of the mountain right down to the sea. It was hard to see the tractors and equipment used to cut the stone, they were tiny among the cuts and folds of the mountain. We could see some equipment with the binoculars.

When we were looking in the binoculars you could actually see the grain in the marble running across the cuts of the stone, The colors of the marble changed as the quarry wound round the mountain. The purest white low near the point, a reddish hue near the peak, light grey bands in the middle. As we passed the quarry the angle of the sunlight changed and the colors changed. It was very interesting to see. 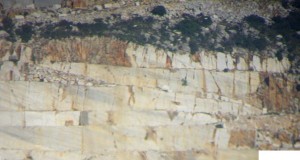 The grain and the colors of the marble

As we passed the quarry we started to see the winds blasting through the cut. By the time we got to our second bailout anchorage it was clear that going on to the fingers was not an option, Skiathos was a question, the wind was piping up so we decided to try it and three miles of force 5 winds (or more) we were safe into the harbour on the western end of Skiathos. This being an island, it was in Bonnie’s guide book. Skiathos is known for its beaches, this beach in particular is known as the third best beach in the world, and the guide book also comments that it can feel like there is also a third of the world’s population on the beach too. We tried a couple spots before we found a place that the anchor would bite. The first time we pulled on it and it didn’t hold, when we pulled it up the bowl of the anchor was solidly filled with grass and weeks. We moved to another place that had reasonable water depths (30 not the 65-80 all around) and as we approached we could see a nice sandy patch under us. We coasted forward and dropped into 25 feet of water. We ran out 150 feet of chain and the hook set nicely. Just as we started to back up, Tsipy looked down and she could see the anchor resting on the sandy patch.

We were in early and being a nice day the tour boats started to arrive. It wasn’t long before I was wondering if the guides were right and there was a third of the worlds population on the beach. It looked very packed from where we were.

Supposedly the third best beach in the world

We went out to dinner at the Big Bad Wolf Grill and had an excellent meal. We quite enjoyed the walk and the meal, it was home for a glass of wine and bed.