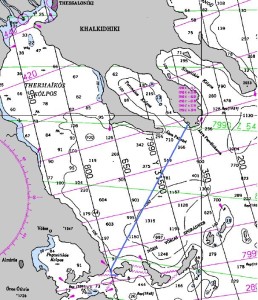 52 miles in a straight line We even missed a freighter

It started as a beautiful morning and when we checked the weather the wind was falling in the afternoon and we would be able to leave and get in just after dark. We looked again just before lunch and the winds were dying early. “Pick up the dinghy and let’s go.” That’s when the trouble started happening. The first was the davits which are raised and lowered by an electric winch crashed down into the dinghy. The wire rope on the windlass had slipped off of the roller. It had been held by a compression screw and that was done. We put a piece of tape a couple inches up to hold things together ground off the frazzled cabled and slipped it back into the slot and did up the compression screw and we were good to go. Rick went down into the dinghy to attach the davit clips to the dinghy and lift it. Otz had notice that there were stress cracks in the forward mounts earlier so we were wrapping an extra orange strap around the dinghy when the ski boat went by with the waterskier. The first forward mount ripped out with the first jerk and the second went with the next pass of the next ski boat. 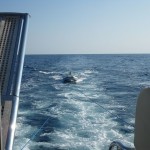 We tried to put the dinghy up suspended by straps but even after three tries we couldn’t do it without putting way too much stress on the inflatable pontoons. So if we were going anywhere we were going to have to go by towing the dinghy. We hooked up a couple of towing bridles and started off. We tried it with a longer tow and with the waves it didn’t seem happy, so we shortened it up. That seemed to work better in the chop we had but when we turned the waves changed direction and it was better off in a longer tow again. It was riding pretty good so we let it run.

We watched it pretty closely the whole way across and as the winds dropped the dinghy ran easier. We were pulling into Porto Koufo on the tip of the middle finger just as the sun was starting to get low enough to give us good colors.