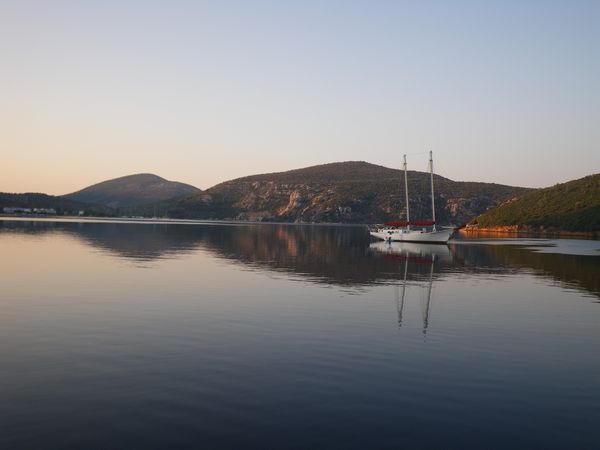 The school ship Encounter at anchor behind us

Today was a maintenance day. The 24 volt system has been bugging Rick for a while, something wasn’t right. And today it seemed to be worse than normal, (both the battery and the amount it bothered Rick). Bonnie and I were starting to work on the dinghy and Rick went to seriously investigate the problem. Before Bonnie and I could do much, Rick had determined the problem, one of the two BRAND NEW Duracell 8D batteries that make the 24V starting system for the engines was flaky. Sometimes it showed 800 CCA not the 1100 it was supposed to, sometimes it showed 60, sometimes a bad connection.

When Rick and I were in the gas station looking for boat parts I noticed that there were batteries there, I saw a box and went to investigate to see if it said “fiberglass” but when it said “battery” I dismissed it and went looking for other boxes. When I took Rick to the dock to see if he could find a battery, I really didn’t expect him to be back in 20 minutes with a new 8D battery. They had an amazing selection of batteries in the local gas station that I wouldn’t except to see in any store at home. The battery came in two pieces, the black battery, and a five gallon jug of acid.

Putting the new battery in was much easier, I think the battery case empty weighed less than the acid. The acid was a little scary. I would pour from the five gallon jug into a funnel to a plastic container which Tsipy was holding, Tsipy would put the funnel into the five gallon jug and hand the container to Rick to pour via funnel into one cell at a time trying to fill them up evenly. The container we were filling was about a 2-3 cups at a time, IT TOOK A WHILE. At the end we had no spills or splashes and everyone was safe.

Back to work at the dinghy. We got the wooden supports in place with through bolts holding it together. We did the covers and epoxy to cover the holes left by the departing pad eyes. After that was the wait, it was hard enough to work after about 5 1/2 hours. We cut patterns for the measurements and then fitted everything, and adjusted the patterns again. By the time we were done the cutting it was getting dark fast enough that all we could really do was cut the glass roving that Rick had bought, I work better with cloth than the chopped strand roving but it will work fine.

While we were waiting the Italian people that had ferried Rick over from the dock motored by and waved. I was pleased to see them but I think they had bigger bikinis on today. 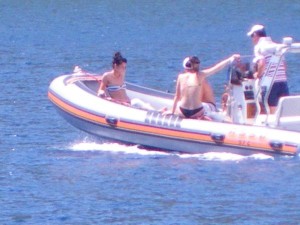