Another day of boat projects, there are always boat things to do. When ever I hear that someone has retired and is bored, I tell them “Buy a boat and you’ll never be bored.” Maintenance is a constant, when you aren’t doing maintenance, you can cruise and enjoy the world. Learn to enjoy the challenge of doing the maintenance and a boat will be a source of constant challenge and enjoyment. The trick is balance, too much maintenance and it becomes work and not enjoyment, too much cruising and not enough maintenance and the boat falls into disrepair and you can’t cruise anymore. The trouble is finding balance. Living on a boat makes you more intimate with it’s quirks and foibles, and I think it is easier to find a balance when you are living on it. Weekending on the boat makes it easier to miss the little problems that can grow if you don’t catch them. 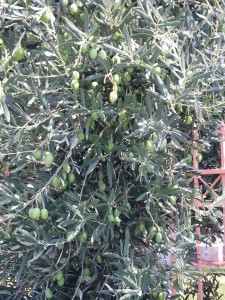 Nice to see all of the olives in the trees

We walked over to the flat where Panagiotis and Marieke were staying and Tsipy and Bonnie went for a ride with Panagiotis to the grocery store while Marieke stayed on the beach. On the way over we saw an Olive tree laden with olives, and a fig tree with figs. She had been studying 4 hours every morning for her CPA exam and this was her last morning to beach so she was taking advantage. We left her alone and agreed to meet for supper that night.

Tsipy and Panagiotis did a little shopping in the town just a few kilometers north and Bonnie did the shopping cart tending. The town is a major beach tourist place, and many of the beach goers go to the market for water and groceries. Bonnie’s comment when she got back was that not only were there Bikinis that really didn’t look that good, but there were a lot of Speedos that should have never come out of the drawer.

Panagiotis and Tsipy stopped at El Captaine and made a reservation on the way back to the dock. Rick and I did provisioning (2 cases of beer and two bags of ice) and returned to the boat to work on the dinghy and check on the provisions. 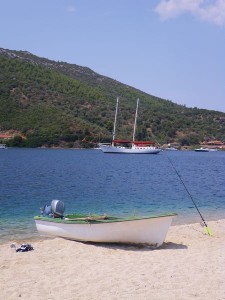 The Encounter’s dinghy returned with just the contingent of girls, we guessed that they might have taken the boys over to the “third finger”. The third finger, Atki Peninsula, is a self governed part of Greece kind of like the Vatican, only less modern. The calendar used is the Julian Calendar (13 days behind the Roman Calendar) and the clock runs on the Byzantine clock with hours of variable length. 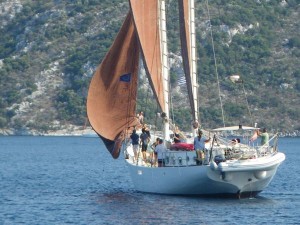 Females, and smooth faced men are not allowed on the island, although still officially in place the rules are slightly relaxed now, female animals can be found on the island and men without beards are allowed. There is no electricity and only a few telephones. There are 17 monasteries listed in the guide and warnings to stay at least a mile off from the lower end of the peninsual (where the hermits are) if there are women on board.

We watched the girls work as a team to raise the sails and head out of the harbour. The tanbark sails were pretty on the old schooner. 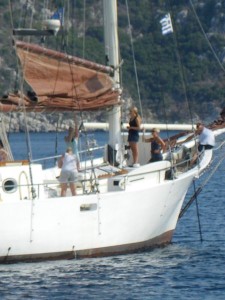 The girls ready to raise the main.

We walked up to El Captaine Restaurant and Supermarket for supper, and met Panagiotis and Marieke. Tsipy had told “El Captaine” that she was an Israeli so there was an Israeli flag flying near our table, when he found out we were Canadian, out came a Canadian flag, an American flag was prominent near the table as well, Panagiotis is Greek, and Marieke is Swiss. An international table to say the least.

We had a good round of appetizers and the cheesesalade and the baked bree were the hits, the calamari was bad enough that I was debating on changing my order from the grilled octopus to something safer but it was supposed to be fresh and not frozen so I tried it again, and it was wonderful. After dinner we had an ouzo and then a home-made chipura. It was supposed to be 55% alcohol but I think it was a lot stronger than that. It was the first drink I’ve ever had that you never had to swallow, just holding it in your mouth would cause it to vaporize and you never had to swallow any of it, just don’t breathe! 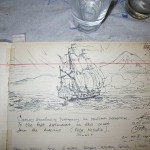 The owner brought out his “Book of Friends” the customer books. There were lots of comments in the books from people from all the world in all kinds of languages and scripts. There were also plenty of drawings and some of them were very good, two stood out one was a beautiful sailing ship, the other a couple of turtles and a vase.

We said goodbye to Panagiotis and Marieke, staggered back to the dinghy and settled for the night.