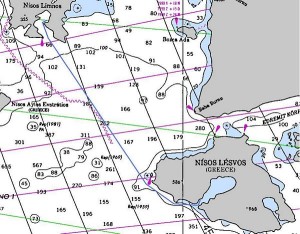 Our last long day in Greece

Our last long day’s travel in Greece, 65 miles if we go to the south end, 83 if we go to the east end. We have to leave at 3am to get into a safe harbour by 3pm when the wind is supposed to kick up a bit. Sitting here writing this at 4, I’m happy to be in early, the wind picked up earlier than the 3pm, it came closer to 2. We got out of the harbour by just pulling in the lines, a light breeze was blowing us off the dock and it was easy. 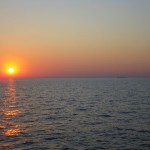 We took turns, an hour at a time, Rick and Tsipy, then Bonnie and I watching for fishing gear and other boats. It was easy to see lots of boats, at one time just as dawn was coming up I looked at the display and it showed 12 AIS targets (usually freighters or fisherman, but bigger yachts like Ricks have them on occasion) and 13 other targets on the radar, the other targets are usually the small fishing boats that ply the waters around Greece, fishing gear, or smaller yachts. It wasn’t the record for the number of AIS targets for the night, that was around 18. One of the nice features was the Closest Point of Approach calculation that the system does. You can move the cursor over and it will tell you the name or identifer of the target, hit check and it tells you about the ship, 600 ft long, 100 ft wide, speed 17 knots, COG 207, tanker, destination Austin, CPA 0.86 of a nautical mile. We play the CPA game on the screen for a while and we never have to actually change course for any of the freighters, we will pass with lots of room, the one that was iffy actually changed course several miles away and headed down on a course parallel to ours and he was long gone. 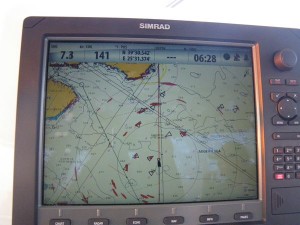 The triangles are AIS targets, the red blotches come from the radar overlay

It was cool and I had my fleece jacket on. Rick and Tsipy had jacket’s, long pants, and toques. By the time we got close to Lesvos we were back into shorts and t-shirts and the wind off the land was noticeably warm.

We worked our way into the large bay of Lesvos and settled into what was suppose to be the best anchorage in the bay. It is just a pretty little place. One taverna, no internet, and no bakery. It’s not at the end of the earth, but the only way out is the way you came. We were going to walk around town but it was like a blast furnace. The temperature when we left the boat was 96 degrees. Rick, Tsipy, and I went for a swim and it was wonderful. Bonnie had a shower so she was ok.

Bonnie and I have been noticing the multitude of great little spots that have tents and campers visiting. Greece would be a great place to go RVing, perhaps another day.

Got home to a casuality, my sandals came apart getting out of the dinghy. The one that I thought I was going to loose was ok, well still flapping, but the sole was attached, the other sole was still in the dinghy and I was part way up the ladder.

A goop of 4250 and we will see if it will hold together for the rest of the trip. 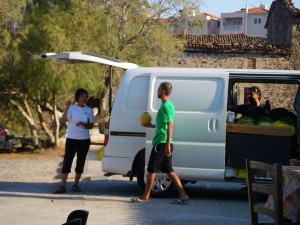