Just a quick note while we are out buying our internet service. We are currently in Itea. Itea is near Delphi. We are hoping to rent a car and go there tomorrow. Then it is a day off for shabbot. Then we head to the Corinth Canal. After that we are waiting for the Meltimi’s to die down, they are blowing strong at the moment 20 to 30 knots for the last week.

We have a few odds and ends to do on the boat over the next couple of days. Nothing serious. I should have good internet service over the next few days

Longer version
We were up early to catch the quiet winds. A bit too early as we had to wait a bit for the light to get high enough for us to see the marks coming out of Mesalongia. We did a slow trip out of the channel. Rick is very conscious of his wake and does a good job at not dragging a wake. The weather was about as good as you could possibly ask for, for motor boat people. No wind, no waves, beautiful sunrise underway. 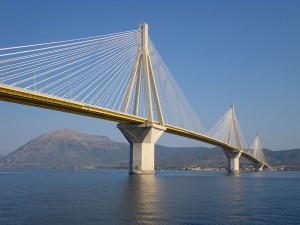 There is a bridge that marks the Gulf of Patras from the Gulf of Corinth. It is a huge suspension bridge with navigation control. We have to call 5 miles out, boats a little bigger than us have to call at 12 miles. We are instructed to pass with “1 pier to the right and 3 on your left.” The current was said to be up to 2 knots here but we only saw 0.5 to 1.0 knots against us. Rick was worried about the winds kicking up and they did a bit, winds gusted to maybe 5 knots but on the other side of the choke point it was calm. Other than the ferries that run under the bridge there is very little traffic. Considering the size of the bridge it was odd to see ferries running under it. We say two crossing side to side about three times while we were approaching but I didn’t see anything on them. There were nine ferries tied up on one side and we could see four on the other but couldn’t get a good count.

Our next big challenge is the Corinth Canal. Utz has been regaling us with stories about waiting two to three hours waiting for a transit to go from one side to the other. They bunch traffic up on the east side while traffic comes through from the west side and then once they’re through they send the bunched up traffic from the east. One direction at a time through the narrow canal. It is closed on Tuesday. Night passages are prettier with the lights they also charge a 25% surcharge for passing at night, passing on Sunday adds a 30% surcharge. Sunday night is a 55% extra. We’re thinking Monday morning!

We are passed by a beautiful classic British yacht of the late 40s early 50s vintage. Very pretty, and we see a couple of large yachts going the other way. There are a few small fishing boats that we give a wide berth too. Partly because we are not exactly sure how they are fishing and don’t want to bother their equipment, the other is we are doing 8 knots and we don’t want to wake them too hard. I got used to sitting a the helm on our boat for six or eight hours a day when we doing the long trips up and down the ICW, Rick’s is much more comfortable and much more automated than mine. It is also much higher so it is easier to see the things around you. I don’t mind spending a few hours sitting in the helmsman seat while Rick does other things. At one point Bonnie and Rick are flanking me and I was doing my look around. There was nothing in front of us, nothing behind us. We had seen one cargo ship hours before. The sea was flat, the wind was nothing, the only air motion was ours as we moved through it. It was a little weird. Did everyone else on the planet leave and not tell us? There is so little traffic that we can’t see having to wait a very long time at the Corinth.

Sitting at the helm flanked by Rick and Bonnie

We made our way to Itea and tied up at the town dock. The EU gave Greece a lot of money to build marina’s and gave them the basic infrastructure, the docks, power and water hookups, the lead lines, all the Greek government had to do was connect up the power and water to the docks, set up the administration and they would have a marina capable of generating 80 to 100 euro a night for a boat Rick’s size. The police came by to tell Rick he had to do the check in and pay the dock fees. They were nice and gave us both the check in and check out at the same time so we don’t have to track them down on Sunday before we leave. The fees for staying on the T-head for three nights is 35 euro. The docks are filled with tiny boats and the odd yacht. With a little work this could be a beautiful marina generating a lot of business.

The yacht on the next T-head was a crewed yacht a 655 Oyster, the owners were coming for a two month visit, it’s rare to have the owners on for such a long time. The Captain (another mike) and his wife, Adele, are the only crew. It’s a hard life for them. The owners want to spend a week here and then go over to the Cyclades where the Meltimi’s are blowing 25 to 35 knots at the moment. They listed a few places where the owners wanted to go so it looks like they are going from one end to the other in the middle of Meltimi season. Friends of Rick’s just sent him a skype message they have been stuck in the Cyclades for over 2.5 weeks waiting for it to die down enough for them to make it to Turkey. It’s about a 35 mile run for them.

We are looking at the course we are going to travel, we have a plan that will take us up the west coast of Greece in the protection of the islands and then up to the north coast where the Meltimis are weakest, nothing much above 10-15 for the last week or so, and then across to Turkey and down the east coast of the Aegean.

We settled in Itea and Utz rented us a car to go to Delphi. Utz was going to stick around the boat and hit the bars and the restaurants.

Rick and I checked the long distance wifi antenna and found a strong signal from a cafe. So we went in search of the cafe for internet service. We paid the fee and walked back to the boat.