It was a beautiful morning. I did a little research on Delphi on Trip Advisor and Wikipedia. I printed off directions but it was all greek to me. Bonnie’s the navigator, one of the pieces of the map had a lot of back and forth squiggles.

The directions I had were in Greek with English subtitles. The road signs were much easier, so much for being helpful. I just handed the map back to Bonnie and started looking for roadsigns. Just outside of the town was a olive grove, the greyish green of the trees is quite distinctive. I took a picture of the olive trees out the car window. It was a big grove and the first BIG grove of olive trees that I have seen. We have seen small groves here and there around the med on our last trips over. When we gained some height on the roads we were able to stop on the side of the road and see that the WHOLE VALLEY was olive trees. It was incredible to see a sea of olive green bigger than the section of the blue water that we could see. Rick’s comment was that it is no wonder why they are known for their olives. Apparently you don’t start getting a real production of olives until the trees are 30-40 years old. Planting trees for your children.

We started up the hill and started hitting the switchbacks. The map was right there were lots of squiggly bits.

We took a scenic route up through a little village and saw a restaurant with a beautiful view, a definite lunch option.

We were amazed that the whole valley and up a large part of the hills were covered with olive trees. When we got to Delphi there were a few cars a bus or two and lots of parking spaces. We walked up to the entrance and paid for the admission to both the Museum and the site. 9 euro a pop which I didn’t think was too bad. We wanted to get the site done early Adele had told us to take lots of water because it was hot. Bonnie and I had 3 500ML bottles and rick had a 2 litre. The day was warm and a bit cloudy but it is great for doing the site. There were quite a few young people on the site and again Rick and I were outnumbered again. I volunteered to take pictures for people taking pictures of each other. Taking pictures of pretty young women, tough job but someone needs to do it. Too bad I have to give the cameras back, some were very nice, cameras I mean! 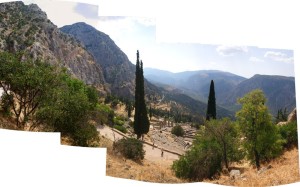 The view from Delphi is spectacular

The site was pretty well organized and had several spots to hide from the sun. There were lots of plaques and things were well documented. Pictures of the site with objects in front of you labeled with numbers and the text on the plaque referred to the numbers. So it was pretty clear what was what.

The Oracle of Delphi, a woman named Sibyl, was actually sitting on a rock outcrop that was actually a gas vent from the earth and most of the time she was talking she was rather stoned. A man “interpreted” her ramblings to the person seeking information from the oracle. Yet another case of man sticking himself between the “Gods” and the people to make money. Ok I’m a pessimist. 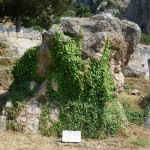 The Rock of Sibyl

The main site has lots of things to see and has a great view from anywhere. We were continually being bombarded by smells as well, rich fragrant smells, we were never able to clearly identify what they all were but there were Olive trees, trees that were covered with things that looked like blackberries and were edible as one of the people in front of us was eating a handful off of a tree, Tsipy identified the plant where we get capers from, rich cypress cedars, and pines filled the air. There was a cypress cedar so covered in cones that it looked like a decorated Christmas tree. A couple of pines were so laden with trees that they were almost black.

Tsipy, Bonnie and I walked up as far as the stadium above the main site, as far as you can go, but Rick stopped to rest his foot. His foot was injured in a motorcycle accident and doesn’t always do down hill well. He is ok on stairs but gentle slopes can cause him misery. We walked around and it was a long way up to the top. By the time we got up there it was time to kill a bottle of water or two. We were able to refill them at the fountains in front of the Museum. After coming down off the site we went to the Museum where there were lots of bus tours in the process of coming in. We were hoping for air conditioning and the Museum probably is but just set at a higher temperature than we were hoping for. 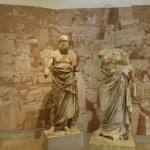 A picture of a dig with statuary from the dig all around the room.

From there we went down the hill in search of lunch, we drove by the restaurant and had to turn around and go back to it. When we got there it was closed for a siesta. The people there suggested we go up to another restaurant, the Bassanos, “maybe open this time”. We saw an advertisement on the road farther up the hill but never found it. We stopped at a place advertising on a rough sign that said “Rooms to rent and Food taverna.” It had a spectacular view and the open air dining area was covered with grapes vines loaded with grapes, “Would you like white, red, or rose?”. We had a beer but when I turned to leave I saw the wine bottles DEFINITELY locally made probably within a few feet of where I was standing. Should have had the wine. I had the stuffed grape leaves with a lemon sauce, Bonnie had a spinach pie, Rick had the spinach pie and Tsipy had bamyah (ocra). The young man that came first had very little english his mother had a bit more and we ended up with a lot of food, all of it was excellent. Normally there is something that we wouldn’t have again but anything we had was very good. Rick tried some of my stuffed grape leaves and he thought they were the best he had ever had.

From there we came down the hill and back to the boat.

After shabbot dinner we went for a walk over to the dock where it was set up for a local traditional dance troop. We listened to the music and watched the dancers for a while and then walked home. Bonnie and I were dead on our feet and it was time for bed