Today was an anchor day. All of us had a nap at one point or another. At one point I finally woke up and Bonnie was still napping so I slipped into the engine room and reassembled the generator covers. It was great all except for one screw was missing, and when I checked with Rick this was not new.
We went into town to walk around and check emails etc. Utz, Rick and Tsipy’s friend is flying into Athens and is going to take a taxi to Prevaza. I hope he realizes that it is a half hour plane ride or a 6 hour taxi ride. For one person I bet the plane is cheaper!

We walked around town and Prevaza and it is a nice little place, Rick and I are still outnumbered in the gender department and I’ve noticed an uptick in the obese population. Nothing close to the problem at home but still a notable difference from Montenegro or even Corfu. 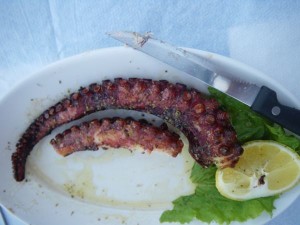 After another round of naps, (it was decidedly cool Bonnie and I had to cover ourselves with a sheet), we headed into town for supper. Bonnie had the mixed soluvalaki and I had the grilled Octopus. Octopus is a dangerous thing to order cooked right it is a wonderful flavor and texture. Done badly it is a rubberly tasteless chunk of shoe leather. I noticed that the fisherman’s market in Corfu and the small market we walked by had octopus on ice. So I was hoping that I was going to get someone who knew how to do octopus well. I’d never consider ordering it at home but I went for broke and it was spectacular.

Tender, slight smoky taste, full of flavor it was the definite win. Bonnie’s dish was also good but the octopus was the winner hands down, Rick had a taste and loved it too. It had to be about the best I’ve ever had. If you are ever in Prevaza at the Mythos Restaurant, have the octopus.

We came home and ran the generator to bring up the batteries and Tsipy made tea and then she and Bonnie made waffles for the morning. I did a few minutes on the blog and processing pictures. I never take a single picture, 10 or 20 maybe but never one. Today was a light day we didn’t do a lot.

Tomorrow Rick wants to go to the fuel dock and top up the two saddle tanks and then we have reservations at the Levkas Marina for a day and it is only about 7-8 miles away so about an hour by boat after filling the tanks. We should have a good day to explore. The weather looks like the next day is an excellent weather day for making the trip into the Gulf of Patras and on into the Gulf of Corinth. Rick mentioned that he was interested in going to Delphi which is not far from the Gulf of Corinth. Bonnie and I are both excited about the prospect of seeing the home of the Gods. According to the Greek Waters Pilot says that Delphi as one of the most spectacular and beautiful classical sites in Greece. We are excited. 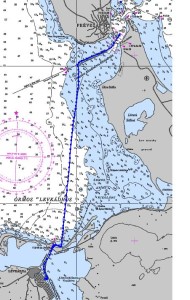 We were up and at the fuel dock at about 8 am. We were met by the fuel dock operator at the Cleopatra Marina. He was friendly and helpful. We were done filling by about 10 minutes to 9, a little over 1000 liters and 1500 euro, ouch! Rick had to go to the office to pay but the office didn’t open until 9, at about ten after 9 the office still wasn’t open. The attendant shrugged “9 am GMT, Greek Maybe Time”.

After leaving the dock we were underway for a long 8 mile day to the marina at Lefkas to get to the marina we had to get a bridge to open for us. It opened on the hour (GMT) and we had about a 40 minute wait. We got a chance to watch the world go by. We could see the remnants of a canal built in ancient times off to our starboard. When the bridge opened the operator must have figured that it was safer to have the full bridge open. Normally they can open just a section of it for about 30 feet width. But with Odelia and other boats wanting to pass he must have figured that the full meal deal was on order. He lifted the two ends and the center floating span swung out of the way. Allowing us to pass without an issue. The marina is just after the bridge so we had a quick day. We were tied up about 11 am. After brunch, Rick and I walked up to the marina office to check in. They were doing long term leases of slips (which you could sublet and make money on) for only 49000 euro for a 20 years lease.

We got back to the boat and Tsipy had started cooking the bread and doing a load of laundry, I was out of clean T-shirts. We went for a walk around Lefkas and found every other shop seemed to be either a taverna, a bakery, a meat or fish shop, or a veggie stand. Tsipy was in her glory. Unfortunately the stores are all closing at 2pm and we didn’t get off the boat until almost two.

So Rick was out of luck getting a SIMM card for his phone. So we still have to suffer getting through a beer for internet service. Life’s tuff.

Utz missed the flight to Lefkas and is now on a bus he should get here around 1800. We’ll see.

The weather is looking good for leaving and making miles.

Lefkas is a huge sailboat charter base with at least three or four charter companies. It has been interesting to watch the charters come and go. There are lots of cruisers here and it certainly has a lot of appeal as a place to come. I could see Bonnie and I spending a long time in this area. It is a wonderful cruising ground.