We left Itea to go toward the Cornith Canal and were hit by less than good weather so we bailed and headed up to another anchorage, one with out internet so no posts. We were stuck there for two days and then headed toward the Corinth Canal. After hear horror stories of waiting for hours to go though, we arrived in time follow a tanker though. We went though the entrance at 9 knots and had to slow down to make sure we allowed the wash to clear from the tanker. 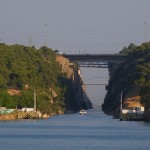