One of the most interesting things we do when we travel either by RV or by Boat is go to the market. You can get a flavor of the people that you are visiting by looking at the food that they buy. If you can get to visit a farmer’s market you see more than you do in a supermarket. If you can see both you learn even more.

Today was a market day for us. We took the dinghy into the yacht club and walked almost completely across town, a slow 15-20 minute walk, if that. The market was full of fresh produce and fish. Shrimp, Octopus, Red snapper, lots of small fish, slabs of bigger fish. Not being a fish person I’m not sure what they were. Some of them looked familiar, some were new to us.

A number of venders had eggs in a bowl. Some were very fresh, some still had the odd feather and other stuff attached. We haven’t seen eggs by the bowl since Black Point in the Bahamas. We will have to start carrying egg crates again. Tomatoes, eggplant (both the normal blue/black and pure white which I had never seen before) squash with blossoms still attached (with bees hovering around them), potatoes, lots and lots of greens everywhere, spices( dill, basil) either fresh or in potted form, honey, watermelons, melons, beets. There were a couple organic producers but most were regular producers. 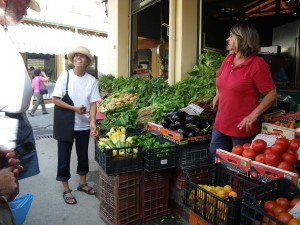 One of the women told us that you can tell a watermelon is sweet by the marks of a wasp. If you see the track of a wasp on the skin of a watermelon it is sweet, the watery ones do not have the tracks on them.

The produce is fresh and well tended, the shop keepers tend their stalls and the fish venders were collecting the water from the melting ice and pouring it down the storm drains so the water didn’t smell up the area. One girl seemed to be doing nothing but walking from bucket to bucket keeping them empty.

From there we walked over to the supermarket. Rick and Bonnie stayed outside with the parcels and I went inside with Tsipy to help her carry. She was looking for a few things, eggs (not refrigerated in a carton, we doubted that we could have gotten the eggs home in a baggy and still had them whole), butter (which comes made from either sheep’s or cow’s milk, we got the cows version), we were looking for chicken filets, which Tsipy calls schnitzel, as well as beef salami (all they had was pork). The supermarkets here have almost no fresh produce, they have meat (not usually fish) and most of it is frozen, lots of cheese, lots of canned goods, snack foods(like potato chips), and cleaning supplies (soap, laundry and dish detergent).

When we got back to the boat Rick and I did a little electrical work and replaced a GFCI circuit for the aft deck. And did a little straightening on the engine room and made a teak holder for the salt and pepper grinders that keep falling over with every wave.

It is nice to see the boats coming and going. There are lots of boats of all sizes and shapes no two seem to be the same make, except for the charter boats. Most of the boats here would make our boat look like a little toy. Anything less than a 42 is a pretty small boat.

My little 34 would look very tiny around here.

The wind still looks good for a travel day tomorrow.

We were thinking about getting a simm card for our cell phone but have decided to try just using skype telephone instead. So far the 3 cents a minute for Skype phone calls seems like a real good idea. I was able to talk to my Mother and Step father for a few minutes as well as my brother in Mass.

All in All things are going pretty well on the home front. I was talking to the friend who is taking care of our lawn and he was down to look and it really didn’t need to be mowed. He wasn’t hopeful about it though as the next 8 days are forecast for rain and colder temps. Doesn’t sound like a good summer at home this year. I’ll be missing the work party to finally get the docks in at Douglas Harbour this weekend. That will be over a month later than last year.

Time for a bit of a swim and a shower on the back deck.