Day one in San Jose 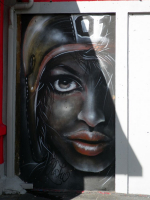 We slept well through the night. Bonnie says she heard the train a couple of times, I didn’t until I was awake, very early according to Costa Rica, not so much according to home time. We had french toast for breakfast and then headed out. We got to the Legislative buildings before we realized we forgot our map and had to go back for it. There are a number of nice street art murals along the way. We tried stopping at the Credit union to see about changing money but no go.

We walked down to the pedestrian mall on Avenue Central and walked the length of it. It is very much set up for the locals. It was interesting to see the stores the locals use. There was a kiosk for the Banco National on the mall and they had it posted with and exchange rate of 526 so that ended our search for a ScotiaBank. We found one anyway when we came out of the Museo de Precolumbian Oro. (The Museum of Precolumbian Gold).

The Gold museum was well worth the time. We figured we should start at the bottom and work our way up and all that did was put us going backwards through the entire three floors of the museum. It is well worth a visit if you are in the area. There is also a large section on pottery as well and we enjoyed it. 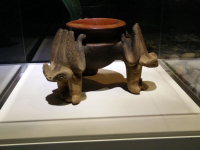 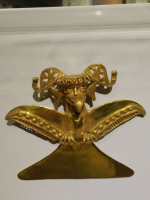 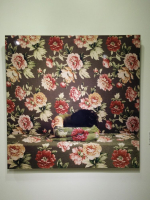 We went to the National Theater for lunch we were running a bit early for lunch but we had a light lunch and enjoyed it as well. The frescoes on the ceiling of the cafeteria were incredible. We asked about a tour but they are rehearsing for a new show and aren’t giving tours. We were allowed to go to the bathroom because we had lunch there and the fresco we could see from the entrance was very cool. Next time maybe we’ll do a tour 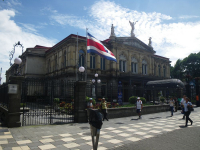 From there we went to the Museum of Jade and it was almost triple the cost of the museum of gold and worth less than half. Unless you have a real hankering to see Jade, I wouldn’t bother. It was almost empty. So was the Museum of Gold. 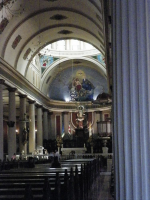 We went to one of our Trip Advisor listed places and had supper, a black bean soup, ceviche, and a chicken with rice. Chellies has been open for over 100 years and the food is supposed to be very authentic Costa Rican, and it was very good. We walked home and tried to get the batteries for my camera to come alive. One set of batteries only lasted for less than a hundred photos and the other set lasted for less than a dozen so it sounds like at least one of them is ill. The phone camera came in handy.