Posted on December 6, 2015 by Mike MacDonald

Once you get a lay of the land San Jose’s downtown is fairly easy. When we started looking at the trip we didn’t bother looking too much into the Barrio Amon it was too far away. We were at Calle(street) 25, Ave 2, a long away from Central, and Amon was something like almost as far from Central on the other side. It took walking on the streets for us to notice that all of the odd numbered streets were east of Central and the even numbered streets were west of central, all the odd numbered Aves were north and the even numbered streets were south of Ave Central. Walking 50 blocks one way to get to the Amon district was too far. 25 not so much, and the blocks here are smaller than at home. 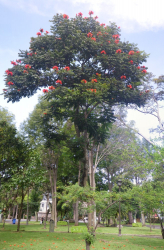 We walked around the Parque National, (with another tribute to Jose Marti, so common in Cuba), the Parque Espania, with a bust of Queen Isabella and our first working fountain in the Caribbean that I can remember! 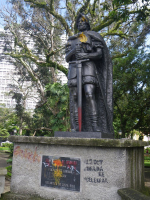 The statue to the Spanish Conquistador had a little modern editorials added. The blade of the sword was painted blood red, and he seems to have a little yellow paint on his face, egg yoke yellow. The Peace Gardens have incredibly pretty gardens. We also saw a number of really interesting buildings. There is a metal building that was shipped in all ready to assemble, a kit building. The panels looked like they were some of the same style that we see in a number of ceilings in our travels. 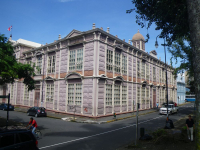 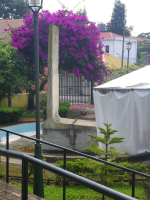 We found a building of brilliant yellow. Bonnie was interested in finding the building as it as a chunk of the Berlin wall as part of the gardens. We ended up walking almost all the way round the building. The North East corner was almost overgrown, but we were able to get a couple of photos of it.

We hit the Restaurant 1930 at the Grand Hotel and had one of their appetizers as a morning snack/lunch. It was a Octopus, sea bass, tuna, and salmon sliced very thinly and served on a huge plate with melba toast. Very tasty and the coffee was wonderful!

This trip our body clocks are just refusing to shift. Both Bonnie and I are having a real problem getting adjusted. We tend to be up with the sun down with the sun people and so what if sunrise is 5ish and sunset is 6ish. As I’m writing this Bonnie and I are working on our trip documentation it is 8:30 AST and 6:30am local I’ve been up about an hour! Costa Rica doesn’t do Daylight savings time so 6:30pm it is black at Maggie’s.

From lunch we walked up to the Scotia Bank and tried to get cash we tried at the teller, Different system in CR and it costs 10% if we don’t use the ATMs so we used the ATMs and it cost us about 1500 collon ($3 usd). Our ScotiaBank daily transaction limit is so low it is a pain in the butt. The only time I remember it and actually need it is when I’m out of country and can’t do a thing about it. (Hint hint, note to self when I’m updating the log at home, call Bev!)

We are going to stick $1500 CDN on our Emergency Visa card (that we never use) so that if we have to we can do a $1000 USD or a 526,000 colons withdrawal at an ATM and not get the fees of a Cash advance. We can transfer the money off the card when we get home.

We walked back to the National Museum and walked around. It is divided into a bunch of different sections including three temporary exhibits, all seemed to be locked up, one was in the process of being set up the other was supposed to be open, but it was locked for some reason. The exhibit we liked the most was the butterfly conservatory. We saw lots of pretty butterflies. They had a bunch of Chrysalis on display and a few were out drying their wings. Bonnie was watching one and it took it’s first flight, right onto her. The wings weren’t quite working well. The butterfly walked up to her neck and then onto my finger and I took it over to a plant. It flew away rather than walk onto that plant.

Other areas talked about the Precolumbian era and the immigration of the aboriginal peoples to the north american continent. There was a “art display” of modern middens (ok, the cynic in me wants to know how much they got paid to display piles of trash!). They also had smaller versions of the Gold Museum and Jade Museum displays. There is a large component of music in the displays on aboriginal people one of the neat things they had on exhibit was a nose flute. They had exhibits on petroglyphs and stone spheres. As we were going through, there were a number of art students sitting down and drawing different objects, obviously a class project of some kind. 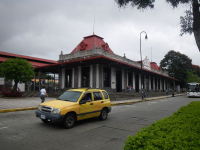 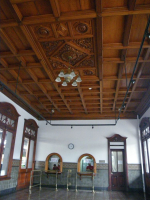 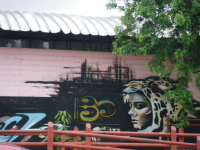 From there we walked up to the Train staion and it was a nice little walk and the station was nice. We walked over to Kuwi Restaurant (looking for La Cafetecha ) the coffee shop is a corner of the restaurant so we decided to have “A formula” a coffee, entree, and a mini dessert combo. The passionfruit cheesecake was tiny but definitely the win! Excellent restaurant and a great place to wait out two hours of torrential rain. We barely got damp going home.