Manuel Antonio park has a limit of 800 visitors at a time. So when the first 800 go in the next person has to wait until one of the people in the park leaves. Our guided tour lasted over an hour and after the guide left we did a couple of more hours at least. We didn’t leave until 1pm. So we were in the park for about 5 and a bit hours. When we came out there were quite a few people waiting to go in. As we were arriving a bus load of Chinese tourists arrived. They were dressed in a way that made me wonder if they really understood where they were going. Fancy shoes and dresses as well as long pants and dress shirts, for a hike in a tropical rain forest. A couple of people had the ‘I want to be anywhere else on earth’ look. Dennis told us that there is a definite demand for Mandarin speaking guides.

Our guide Dennis brought us a small breakfast with a watermelon and a cantaloupe and water to fruit juice to drink that was great as we didn’t have time for a breakfast other than a coffee at the common kitchen at the teak house.

Here is a tripadvisor link to Reviews on Dennis email is redhot2712@gmail.com if you want him to do a tour for you. Please tell him Maggie sent you so he knows to be nice to Maggie. 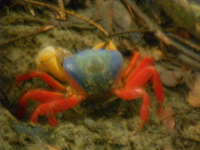 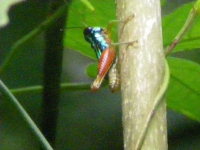 We saw a couple of blue morpho butterflies just flying by. There were also colorful grasshoppers, crabs, other butterflies. We also saw three different kinds of monkeys, a two toed and three toed sloth, and a bunch of raccoon. A bag left on the beach is ripe pickings for the raccoon and if they don’t get it the monkey’s will. We brought our swim suits and I changed into mine but Bonnie passed. When we came back to the beach Maggie and Jamal were swimming and they had left their bags hanging in a tree. We walked over in their direction and they ran over to chase away one of the local bandits in the form of a monkey. We got there and took a look at the tree. It was a Manchineel. We have been seeing them since our first trip to the Caribbean in the very early 90s. If you are standing under a Manchineel and it rains you could get chemical burns. So we moved them along. Its name comes from the Spanish Conquistador’s name for it “manzanilla de la muerte” in English “The little apple of death.” 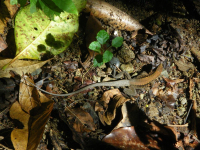 We swam in the water of the pacific and it was so warm that there was no hesitation about going in, no ‘belly button freeze’ at all. The surf was coming in pretty good and every once in a while we would get a big swell and it was a great ride until it plunked you into the bottom. I enjoyed the swimming. Bonnie got her feet wet and walked the beach, all she found was a couple of small shells. We walked a few more trails and then changed back into the regular outfit and headed back to the car. More animals on the way out of the park, three kinds of monkeys, at least a couple of sloths, and lots of B and Bs (Birds and Butterflies). 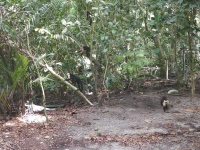 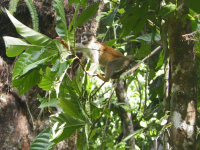 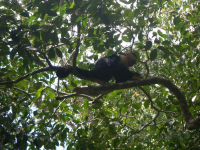 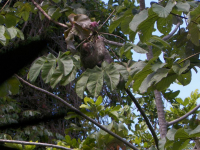 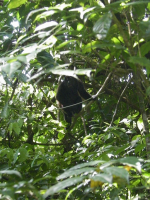 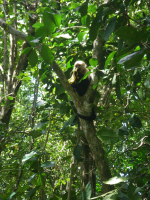 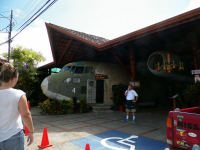 We drove to the El Avion, one of the two planes purchased to run drugs and guns for the CIA. Contra gate blew up before it was pressed into service. It was abandoned at SJO and purchased cut up into seven pieces and then put back together to serve as a restaurant and bar. The “Contra bar” is open until 2 am. 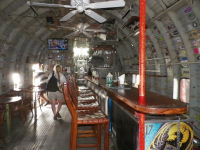 Not a problem for Bonnie and I. We managed to get home and have a shower and a siesta.

We went to the Falalfel house for supper (good) and then across the street to the Cafe Milagro for drinks, their claim to fame is one of the original people to pay a fair wage to the coffee growers and starting to sell good Costa Rican Coffee in Costa Rica, as opposed to shipping it all offshore and leaving grunge for the locals.

We met a one of the Mary, one of the other people from our casa at the Cafe and talked to her for a long time (until there was a break in the rain). The break in the rain never came so we decided to hail a cab for the few hundred yards rather than soak us (and our cell phones). It was coming down in buckets for over an hour while we talked and it hasn’t stopped yet.