November 22 Back to Maggie and Jamal’s 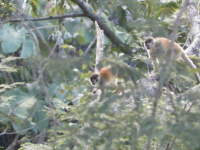 We awoke early to the sound of the squirrel monkeys arriving. They came as a large troop it was impossible to count them all at the same time as they were constantly moving and appearing from different places and then hiding in the large tree. There was over a dozen. We watched them for a long time and they gave us a good show. We got lots of videos. Room 1 or 2 is the room to have at Casa Buena Vista.

We had a reasonable breakfast at the casa and then packed up to leave. As we were leaving we noticed we had a flat tire. After Asking for Tire insurance several times I will not be pleased if this costs me a ton of money. We changed the tire, and showed Maggie how to change a tire. That wasn’t a long delay. We went up to Hotel Gaia to where Shawn Bauer our Sobeys chef worked when he was in Costa Rica. They are trying to reintroduce Macaws back into this area and are releasing them at the resort. (They also stick around for the guests to see) 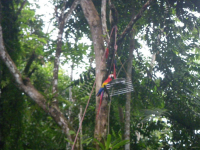 We saw several Macaws and a few Capuchin monkeys, one with a baby it was kind of cute. We left there and the GPS’s were trying to send us back up the road we came down and that wasn’t going to happen. 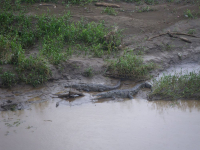 We kept on going toward Jaco, known for it’s prostitution and drugs. We passed by and stopped at Rio Tarcoles which is famous for it’s crocodiles. Before we went we had lunch at the restaurant. It was a buffet lunch with lots of local specialties. So it was very good. We walked back along the bridge and there were lots of crocodiles around. We stopped and got gas as we were below a half tank. Gas was just over a 500 colon a litre. Both Jamal and I had our GPSs going and they were arguing before we got it figured out we ended up taking the route we came in on so that didn’t work so well. We were not interested in taking the original route back. We made it back safe and sound.