November 23 A walk to Barbacoas

Bonnie and I needed a laundry and a bit of exercise. So after the laundry got hung on the line we were off for a walk up the hill to Barbacoas. On the way we saw a number of coffee farms that are Maggie and Jamal’s neighbors. We also saw a number of parades of leaf cutter ants that seem very common here.

We heard that my step-sister Diane Campbell died. She was suffering from Brain Cancer and was not doing well when we left, still it was a shock that she was gone that quickly.

We walked up the hill to Barbacoas and went to the fruiteria and got some spicy peppers, cilantro, and a large pineapple for 1500 colon (about $3 USD) from there we walked all of 15 feet to Soda Rositas before it started to rain. We had a cream banana smoothie while we waited (1600 colon) and then the rain stopped so we went to the local butcher shop and got some chicken for supper that Jamal suggested. 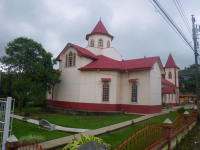 We walked back and picked a couple of limes on the way down the driveway to spice up the local peppers. It was actually not a bad walk. Not nearly as bad as I expected it to be. We got home at a decent time and did some skype phone calls to talk to some of the people at home. The funeral is the day after tomorrow. I’m sorry we aren’t there to lend support.

Going to bed we found an ant’s nest in the closet in our room and there were a few hundred ants to deal with. By the time we took care of most of them the room was smelling enough of chemical that Bonnie and I slept on the couch downstairs.