Posted on December 8, 2015 by Mike MacDonald

We decided to try for the Turu Ba Ri Park that Maggie suggested. It had a nature walk and a zip line. We were a little late leaving so we didn’t get there until about 11. The zip line takes an hour and the Nature walk takes 3 hours. We figured the zipline, then lunch and then the nature walk was the best order do we were off. We got asked if we would wait for another person she was just finishing up the horseback riding. We didn’t mind there were only two of us on the zip line. 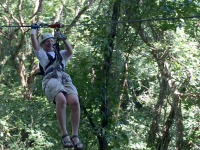 The park was EMPTY. When we arrived we thought it was closed. There were only 4 cars in the parking lot. Laura arrived and we went through zip line school! How to break, how to straighten yourself that kind of stuff. They are responsible for everything as far as connecting and disconnecting you. So that is all easy stuff. Our job was to sit down and not panic. WE did ok on both of those jobs. We really didn’t need to do much on the breaking side of the house they have a safety braking system and they never gave the brake signal to us once. It was very safe and fun. Bonnie was watching the cable for the first of the eight lines and didn’t look around much. The second cable the guys started bouncing the cable, Bonnie was distracted enough by the bouncing that she looked around and started to enjoy it much more. I clicked the movie mode on the camera as I was starting to zip and then held on. It was hanging under my arm for the run so the movies weren’t real high quality, one looked at a cloud the whole way. I did get a few good movies of Bonnie and Laura coming in to land. And I have one of Bonnie almost the whole run. Laura gave me her email address so that I can send her proof of her adventure. She was hesitant about going on the superman ride. The top speed of the zipline is about 45 km an hour and you are sitting down. On the superman ride it is an 800 meter run that you are face down with your body flying straight down the cable at speeds up to 80 to 90 kph. We saw her coming off the ride. She said it was easier than the zip line they did everything as far as controlling speed and breaking. We didn’t see her do the run. She was all smiles after. 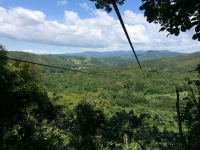 We had a really nice lunch but the win was the pork ribs and the plantain. The sour-sop juice was very good too. We just finished our lunch and was wondering how to get to, and when the next Nature walk was. When we arrive we purchased the Nature walk, zip line, and lunch as one item. So they gave us three wrist bands a blue one for the zip line, a white one for lunch and a green one for the Nature walk. As you complete the “experience” they remove the wrist band. So after lunch the girl from cashier desk caught my eye and I pointed to my wrist band. She looked over at the guides at the table and he came over immediately. He was ready to go when we were. They are NOT busy. 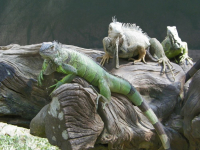 He asked if we were ready for a three hour hike and we said we were. He wasn’t too sure about ME. But I did ok. We trimmed it a bit short (we passed on the sugar cane 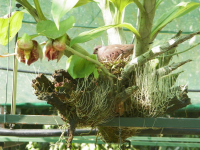 farm/mill, we’ve seen that before) but we got to see the iguana habitat, the orchid garden, the bromelaid garden(a pineapple is the only bromelaid that you can eat), the butter fly area, and the cayman/crocodile area. We also walked through a wooded trail that had lots of trees and things labeled. It was a nice walk. We got to see a couple Scarlet Macaws fly over and then saw one feeding in a tree. So they do seem to exist in the semi-wild here. The seed pod of the tree that they like is actually poisonous, to eat it they have to ingest a small amount of clay from the river bank to absorb the toxin. 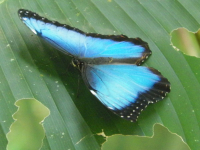 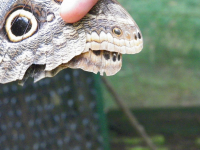 We got to the car and it was reading 98 degrees. It was definitely hot. We left the park and started up into the hills. The temperature dropped rapidly as we climbed into the hilly up and down section through the mountains it was down to 88 degrees when we came upon a group of people on a bicycle tour through the mountains. The temperature was about the same as the age of the group. There were more than a couple of them that looked like they were ready for a stroke. I was tempted to roll down the window and offer encouragement “There’s only another 10 miles to the park!” Some of them probably wouldn’t have taken it as encouragement. 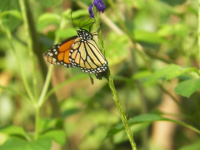 We got home and all things were good here. We made a cupboard special from the leftovers in the fridge, so a grocery store run is on deck for tomorrow.