November 25 Tucans, Santiago de Puriscal, a walk to Cortezal, and a sunset

Posted on December 8, 2015 by Mike MacDonald 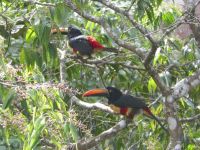 Bonnie and I slept in late for us. Maggie and Jamal were up and going by the time we were going. That was unusual. We had a late breakfast and then Maggie noticed tucans in the tree by her bedroom. Bonnie saw them before but I hadn’t. So I had to take lots of pictures of them. They are a colorful bird. 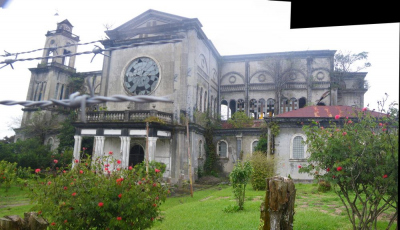 We did a short drive to Santiago de Puriscal to do a little tourist visit. It is a very busy shopping area for the locals and not much in the tourism end of things. There is a church that was beautiful at one time but it was damaged by earthquakes and was not able to be repaired and condemned. There is a nice little park and Bonnie and I did our usual visit with the park and walked around a bit to watch the people. Puriscal is where Maggie and Jamal do a lot of their major shopping there, so they knew a few spots to go. Their favorite is La Vaquita a nice home made meal Costa Rican style. So we were off in search of La Vaquita for lunch. The locals have a curious habit of knowing where everything is, even if they don’t. One lady sent us off across the park and down a side street 25 meters. The next gentleman we asked sent us back up the street and to the right. The girl in the store said up the street 100 meters turn left and 100 meters. The girl in the store was right. We were in sight of it before the lady in the park sent us in the wrong direction. Such is life. The food was good Bonnie had an empanada and I had a Bistek plate. It was a big meal. I was glad we were splitting that way Bonnie could eat most of my large plate. 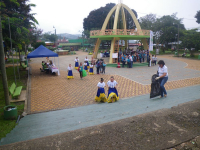 Our nav software is a little confused by one way streets, there are a lot of them it doesn’t seem to know about a lot of them and wants to send us the wrong way on the streets. We survived and got back to Maggie and Jamal’s without a problem.

We decided to go for another walk and instead of turning right to Barbacoas we turned left to the little community of Cortezal. It is a dead end road with a school, and two corner stores, Mario Lopez owns one of them and Maggie’s emergency address is 300 meters east of Mario Lopez’s. There doesn’t seem to be any civic addresses just addresses relative to other “well known” places. Our AirBnB place was 75 meters west of the KFC in Barrio La California in San Jose. 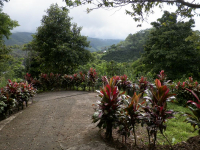 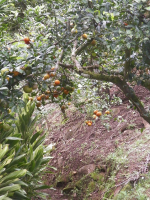 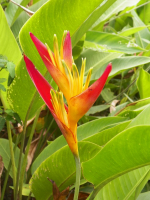 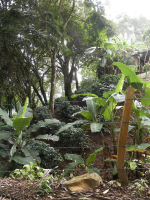 We saw lots of pretty flowers, lots of coffee plants, and what looked like a weigh station/grain elevator style coffee bean place where the locals were bringing all of their coffee beans to be weighted. The locals were definitely not used to seeing a couple of gringos walking around their part of the world.

We came back to the house and had to do a emergency run to the grocery store as Alturo and his wife, Liz, were coming to supper and we had a change of menu. Hamburger for a meatloaf runs about 2000 colon a pound ($4USD).

There was an absolutely beautiful sunset in the clouds, where we are we have no horizon. Still the clouds were very pretty.