November 27 Monteverde, a Day of insects!

Posted on December 9, 2015 by Mike MacDonald 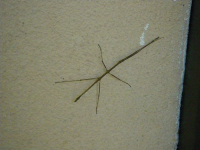 Bonnie started our day off right when she found a stick insect by the door of the Maggie and Jamal’s in the morning. It would end up being a day of bugs!

Maggie and Jamal were ready to go by early afternoon. So rather than have lunch here we left and got as far as the Autopista before we stopped for lunch. The tire was holding up well. The car has an unnerving habit of loosing power going up hills. It isn’t consistent but every once in a while I start going up a hill and it won’t hold power. I’m down to second gear or even first before it picks up enough power to get going again. It did it a few times on the way to the Autopista. There was a bit of debate as to the state of the road. The map says the bottom is dirt and the top is paved. The system that Jamal and Maggie are using says it is fine. There was a lot of traffic up to Route 606, which is the main drag up to Monteverde. We were pleasantly surprised by very little traffic and nice paved roads for the first half of the run. It degraded quickly after that. It was a rutted washboard road for about 20-30 kms almost all of which were uphill. The village itself was actually paved which was a nice bonus. Monteverde is the continental divide. So it is quite high. 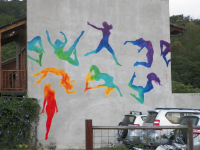 We got to Monteverde and checked in at the Hostel Sloth Backpackers and got into our rooms ok. We got there about an hour before the tour bus was supposed to get there to pick us up to take us on the night tour. We walked to the tour office to settle up with the bill on the tour and the tourist agency that Jamal and Maggie work for had settled the bill already. 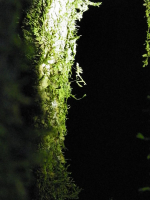 Then it was up to Beso Expresso and had an absolutely wonderful coffee. We changed into long pants and a jacket for the night tour and then waited for the tour bus to pick us up. The Tour was interesting, since it was night most of the birds and mammals were sleeping but we did get to see a pit viper and a baby pit viper as well as lots of frogs and insects. As well as a large spider the size of my hand that had red bands around the legs. We did see a number of sleeping birds as well. All in all I’m glad we went but I was glad I didn’t have to pay full price for it. 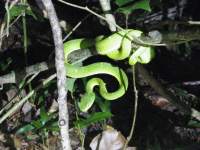 I didn’t sleep particularly well for some reason. The room was ok but nothing special.