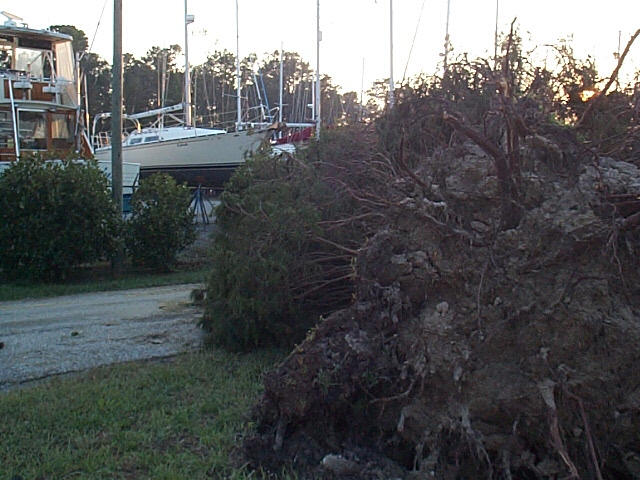 Note: The following was written in October 2003 and intended for “Charlie”. It still invokes powerful memories for me and is posted as it was sent.

Hello Charlie (and others)

We arrived in Deltaville VA from Canada in time to strip our boat (even more than it was). The next day we were in the process of deciding if we should stay or run from Hurricane Isabel when Mathews County (the county we see across the river) did a mandatory evacuation. With our backs to the water if the storm turned north we decided to run south and west into North Carolina across the face of the storm and on the “safe” side of the storm. We stopped at a state park and were just getting settled when the park ranger came by and asked us to leave as the park was closing. They were worried about falling trees. We stopped for the night near Siler City NC in a Walmart parking lot. We were tracking the storm on our weather radio and where we were was expected to get 40 mph winds with higher gusts. “Winds from the NE 10-20 by 8am with rain bands and winds NE 30 by 10am” While Bonnie did dishes I dug out my compass and stood out in the parking lot getting my bearings.

We pointed our RV at NE and went to bed with the plan that if the storm turned toward us we would run again but if it stayed on track or turned North we would stay. It stayed on track and at 8 am we were watching the spiral clouds over us as Isabel neared the Outer Banks. We were sitting the RV debating if we should wait until after lunch to move the nose of the rig more into the wind when we took a blast of wind that leaned us over and held us for a few seconds. Bonnie put the stuff in the sink as I turned us into the wind. We tacked the RV in the Walmart parking lot every few hours. By dark, the storm was nearly over and we our nose had moved all the way around to the west.

Siler City had lost power many times but there was very little real damage. We were up early and started back toward Deltaville. As we got closer to the storm track there were more and more trees down, more damage. As we approached the line from the “safe” side to the “dangerous” side the destruction took a noticeable leap. Guardrails were crashed toward the road from the trees hitting the back side, power was nonexistent, traffic was very light, Interstate 85 South was blocked by rising flood waters, on our side the passing lane was just starting to go under. We were passed by 41 (yes, we counted) Georgia Power line trucks and support vehicles on the way to help in Virginia. We were nearly out of fuel when we made it to Deltaville. The road to the boatyard was blocked by a tree laying on power lines. While other vehicles could make it our RV was too high, we walked the last couple of miles to find out both Millennium Odyssey and Latitude were fine.

We have had almost a month now to work on the boat, take our RV home, return to put the boat in the water, and reflect on Isabel.

We remember the incredible destruction of huge trees in the middle of a patch of smaller and undamaged trees. The leaves of the hardwoods turning brown after surviving the blow then later turning green again as new life started. The trees blossoming in front of the boat. The huge elms and cedars that were destroyed while nearby an old mirror leaned against a building was unmoved and undamaged. The boats that were sunk and raised that are now in the yard. But those aren’t the things we will remember long term.

We will remember a girl named Charlie on the radio for what seemed like 20 hours a day. We were in our own little very quiet and dark world. We worked away on our boat with what seemed like minor inconveniences while the world around us was dealing with major destruction. We remember Charlie trying to find a generator for a woman on oxygen, we remembered our portable generator that we decide not to bring with us and wished we had. We remember the stories of the “Georgia Southern Baptist Southern Convention Emergency Relief and Chain Saw Team”. We remember the stories of the power coming on and off, we remember hearing about Alabama Power (pronounced “bama pow-a”) , Georgia Power and the many others. The arrival of the “Georgia Southern Baptist …”‘s portable showers and that while they would not accept donations they freely gave over 3100 showers.

We will remember the many stories that remind us of the kindness, generosity, and strength of the people of the south.

But first of all we will remember the call that Charlie put out saying that if people wanted to show their appreciation to the Alabama Power workers they would rather take donations of books for children K to 12 than bottles of “adult beverages”.

Every couple has little quips that mean a lot to them but have almost no meaning and is nearly impossible to explain to anyone else. We have added one to our lexicon for those situations of unexpected kindness and generosity toward a third party, “what would you expect from a “bama” lineman?”

Best wishes and thanks for the memories.