We were up at a reasonable time, the winds were supposed to drop during the day so there was no advantage in getting underway too early. We left korfos and had an easy trip over to Palaia Fokaia, a small community about 30-40 km down the coast from Athens.

Our anchorage at Palaia Fokaia

The windlass on Rick’s boat is driven on AC power, it can run on the inverter he has but we normally turn on the generator because it is just at the limit of what the inverter can do. Rather than trip the inverter we just run the generator. When Tsipy starts the generator she checks for cooling water as fast as Bonnie checks for cooling water when we start our engine. After anchoring Rick came down to the deck level and immediately turned off the generator, there was no cooling water. We went down and checked and the engine was hot, about 195 degrees, but not damagingly hot. So the ladies and Otz went looking for groceries and Rick and I replaced the water pump on the generator. I’ve been on boats that have not had a spare impeller for their engines, Rick has spare water pumps! We replaced the water pump completely and started fishing for impeller bits. The entire impeller was completely shredded into very tiny bits. We took the down stream hoses off and dumped bits out of them. Then we took the cap off of the heat exchanger and fished out a few errant bits that made it that far. Once we were convinced we had the passages clean and everything installed correctly we reassembled the generator and started it up. We took the bad pump up to the back deck and started working on removing the impeller. That took most of the afternoon. We tried everything and finally taking a two pound sledge and driving what was left of the impeller down into the pump broke it free of the shaft and we were able to remove it. After checking for any damages from our increasingly violent attacks on it, we reassembled the pump, and were just finishing up as Otz and the girls arrived back. Tsipy was all smiles to see the water spurting from the generator hole.

Rick and I took a swim and a shower on the swim platform to freshen up. From there it was a case of plotting and figuring where we could go while the weather window was open.

The weather was clear as far as Evia. Evia is north of Kea and lies along the east coast of mainland Greece. The last time we left Piraeus and the Meltimis nailed us just beyond the point and we went to Kea as a harbour of refuge. This time the weather was much better and we were looking for light and variable winds with almost no seas, but we had to leave very early to get them. Winds were scheduled to pick up starting at noon. Every day has a lot of calculations on weather, accompanied by lots of worry and a few thousand what ifs. 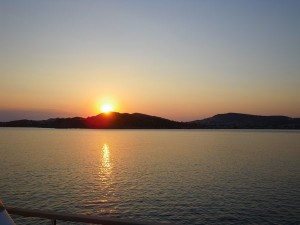