We had a wonderful summer and the trip up river was the icing on the cake.

As usual we had more things to get done than we could get done so we were late getting to the lake. So rather than Mount Creek we ended up staying on our mooring for the night.

It was a race night and we got to see a lot of the racers come and go as we sat in the cockpit reading and drinking wine.

It was a pretty night. 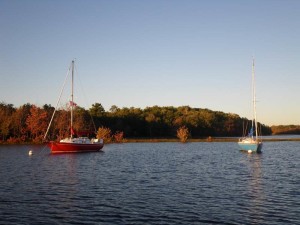 The next day was a day of light wind so we could get up the river easily, even though it there was a 1-1.3 knot current against us we stayed at “sippy cup speed” about 2200 rpm where the engine just sips fuel. We were only doing about 4.9 knots over the ground but we had a chance to see the colors. The trees really haven’t got their full color yet but there were spots here and there where the color was pretty. 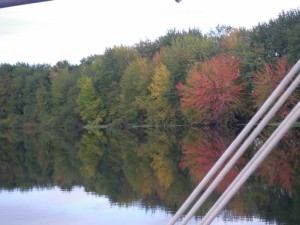 We anchored at Middle Island in the early afternoon and took the sails off while they were nice and dry and the deck was dry so that we could store them in the basement until we had time to inspect and fold them up properly.

Once the sails were off we sat in the cockpit and had wine and cheese and watched the sun set on the trees and the river.

I don’t think we moved all night 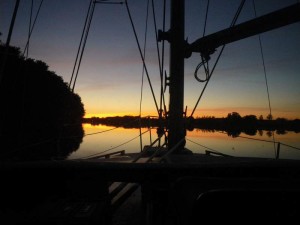 The anchorage was quiet and still all night.

By the Oromocto Boat Club

and back to Fredericton

We were on our way home today from the hardware store and had to stop and take a photo of our backyard. Our “lower 20” borders on the highway, unfortunately I only had the phone on the camera. Next time I go out I’ll take a real camera with us.

This is the view of our property from the highway