Stepping back a few days, The Corinth Canal 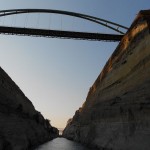 That bridge is a long way up

We left Confused Windy Bay, our name for the anchorage we were in. It came by the name by the weird winds we got. We set our anchor anticipating northerly winds in the forecast but the winds were anything but. We were getting blasted from all sides so we pulled up our 100 pound anchor that must have weighted 200 pounds with the mud and grass on it. We reset and tied our stern to a tree, the wind picked up from the side and it was blowing so hard that it was bar tight. We released it from the tree and the wind died, then it blew us in a clockwise circle, then a counter clockwise circle. We finally just turned off the anchor alarm and let the boat spin in circles. We knew the holding was good!

We left early, another 3 am anchor up, and the wind was about what we expected, maybe a little more but not bad. We made the tip of Akra Melangavi, which gave us good protection from the seas and the waves died down to almost nothing. We continued on and switched the radio to channel 12 for the Corinth Canal. We had been following a freighter for several hours at about the same speed. The freighter was a little faster than us but he was not leading us by a lot. We heard a call from the freighter with a reply and then a sailboat called, “follow the blue freighter” came the reply. Wait a sec, we were following a blue freighter! Rick called and was told to speed up and follow the blue freighter. After being told of waiting for hours to enter the canal, Rick was speeding up to 9 knots to get in at the tail end of the freighter, the two sailboats following us, with one paddling as fast as he could to get into the convoy. Rick slowed down to match the speed of the freighter as reported by the AIS transponder. We were through the canal without slowing down hardly at all. The tug was towing the freighter through at 7.2 knots rather than our usual 8. The other horror story that turned out false was the terrible place to tie up and fend off huge black tires that would mark your hull. The tires were gone and a reasonable rub rail for your fenders was installed. Rick was tied up and on his way back by the time the sailboats were tied up. The only painful part was the fee at a little over 100 euro per kilometer! It cost around 350 euro for the 3.5 km trip.

The difference in the cost of fuel was probably a wash for Rick but the trip was probably easier on the stress level.

From the Corinth canal we entered the Saronikos Kolpos just 40 miles from Athens. But since we had started early and the winds near Athens were supposed to kick up, we headed to Korfos. A lovely protected bay just 20 miles away.

The Corinth Canal was started by the Greeks in ancient times, they actually dragged ships over the area using logs, the French dug the canal in the 1800s and it requires a day of dredging a week to keep it open.

The canal was very pretty in the early morning light. The colors in the sandy walls were everything from almost pure white to a pinky-rose to a dark beige. There are many high bridges over the Corinth now and there is a sinking bridge at the west entrance. We’ve seen several ways of opening bridges in the ICW, but we have never seen one SINK! They drop the bridge on cables and ships go over it. The tanker in front of us was being towed by a tug. We didn’t get to see the bridge actually sink, it was gone by the time we got to the canal. There are markings at the east end for a bridge and I was hoping to see it rise and fall but by the time Rick was out of the building and ready to leave, another boat was heading west and the bridge never moved. I don’t know if the road is still in service or not, but I bet there is a section of bridge down there.

We were thinking about going to Athens as it was early in the day but we headed toward Korfos about 20 miles away. Otz wanted to go to one of the free docks so he could wash the boat. Washing the boat is a full crew effort so at one point or another Otz washing the boat had all of us working. But working with a spray hose, wearing a swim suit on a 35+ Celsius day was not a bad thing. We could just soak ourselves when the day was too hot. The free dock is paid for by having supper at the restaurant we were tied up at. The food was expensive, looked good, and was our worst meal so far. Food should never look better than it tastes, this food definitely did.

We went for a walk and walked all the way out of town, less than a football field away. They seemed to be set up for the tourist trade but things seemed very quiet. None of the restaurants seemed busy even after our walk, we eat later here than we do at home but the Greeks eat later than we do. None of the restaurants we walked along had more than one or two tables busy. Otz was talking to the owner while we were on our walk. He insisted on us paying cash and if anything got reported to the government I would be shocked. When we were here before there was one price for credit cards and one price for cash. The cash price was always much cheaper than the credit card price as the cash prices didn’t include the value added tax, (from my understanding of the bill, 23%). Most places we have been dealing with cash and credit are the same price. People are starting to get the idea that if they want a functioning government they have to pay for it. From the bureaucracy that we see and the number of excess staff they have, the Greeks have a long way to go but it looks like they are starting down the path.